Tinea capitis most often presents in young children. In New Zealand, the zoophilic dermatophyte Microsporum canis has traditionally been the cause of tinea capitis and is due to contact with an infected kitten or rarely an older cat or dog. However in the last decade, T. tonsurans and T. violaceum have also become common causes of tinea capitis; these are anthropophilic organisms, i.e. they naturally infect humans. Anthropophilic tinea capitis may result in asymptomatic carriage in adults and children and can be transmitted by sharing hairbrushes and clothing.

Tinea capitis is classified according to how the fungus invades the hair shaft. 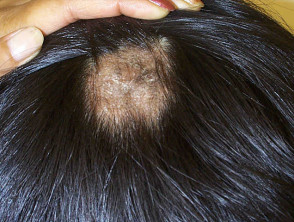 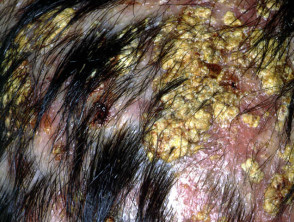 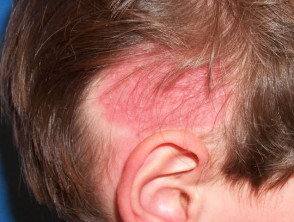 A Wood's light is a hand-held fluorescent lamp emitting "long wave" ultraviolet A. In dark conditions, certain infections fluoresce on exposure to the light.

As colour contrast increases on exposure to a Wood's light, the extent of pigmentary disorders can be determined. 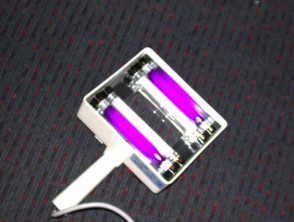 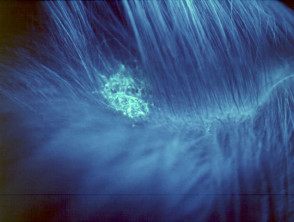 First confirm the diagnosis of tinea capitis; use a toothbrush to obtain scrapings of scale and pluck a few loose hairs for mycology. Look for other sites of infection (feet, nails). Consider other reasons for scalp scaling and hair loss especially:

Tinea capitis requires oral antifungal treatment because topical agents are unable to penetrate to the base of the hair shaft. To reduce infectivity, it may be useful to wash the scalp using ketoconazole shampoo and to apply antifungal cream.

Oral therapy is required for four to eight weeks, usually terbinafine or itraconazole. Oral azoles require specialist approval for PHARMAC subsidy. Griseofulvin may be more effective for M. canis infections but is no longer readily available in New Zealand.

Treatment should be continued until scaling has cleared up and there is new healthy hair appearing. If in doubt, repeat mycology and continue to observe.

Immigrants from the African continent are particularly likely to be carriers of anthropophilic scalp fungi. Find out which measures have been proven to reduce transmission.