Torre-Muir syndrome is a rare inherited condition in which there are sebaceous (oil gland) skin tumours in association with internal cancer.

The gastrointestinal tract is the most commonly affected organ, with almost one-half of patients having colorectal cancer. The second most common site is cancer of the genitourinary tract.

What is Lynch syndrome?

Lynch syndrome is also known as hereditary non-polyposis colorectal cancer (HNPCC). The inheritance is autosomal dominant. It is the most common genetic syndrome that gives a predisposition to cancer of the lower gastrointestinal tract (colorectal), uterus (endometrium) and ovary. It is due to an inability to repair damaged DNA.

Skin lesions may occur before or after the diagnosis of internal cancer. Sebaceous tumours are generally otherwise rare and their development should arouse suspicion of Torre-Muir or Lynch syndrome and the need for more investigative tests. Sebaceous hyperplasia and sebaceous naevus are not usually related to Torre-Muir syndrome.

The sebaceous neoplasms associated with Torre-Muir and Lynch syndrome include:

Not all instances of these tumours are due to the syndrome.

Other skin lesions that may arise in affected family members include:

Sebaceous adenoma and sebaceous epithelioma are the most characteristic cutaneous markers of Torre-Muir/Lynch syndrome. 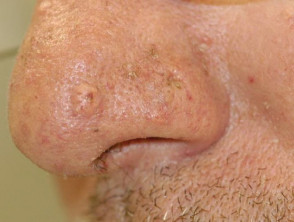 Sebaceous carcinoma is a malignant tumour that occurs most commonly on the eyelids.

Solitary or multiple keratoacanthomas are commonly seen in Torre-Muir syndrome.

What is the cause of Torre-Muir syndrome?

Torre-Muir syndrome and Lynch syndrome are autosomal dominant conditions due to genetic mutations, meaning half of an affected person's children also have the syndrome.

Mutations in 4 mismatch repair genes have been found in Torre-Muir and Lynch syndromes. These mostly involving the MSH2 gene, located on chromosome 2p.  Some patients have mutations in the MLH1 gene on chromosome 3p.

How is it diagnosed?

Torre-Muir syndrome is usually suspected because of the clinical features. However, if a sebaceous adenoma, a sebaceous carcinoma or colonic polyp is removed surgically, the pathologist may examine the cells to see whether the MSH gene products have microsatellite instability, a characteristic of the syndrome. Immunohistochemistry testing shows loss of MMR protein expression, indicating a mutation in MSH2 or another associated gene.

MMR-deficiency is present in 30–45% of sebaceous lesions but not all of these result from the syndrome. If the patient's personal or family history or clinical features are suggestive of Torre-Muir or Lynch syndrome, the patient may undergo further genetic testing by whole gene or whole-exome sequencing.

What is the treatment for Torre-Muir and Lynch syndromes?

Patients with Torre-Muir and Lynch syndrome need to undergo medical and physical examinations and appropriate laboratory and radiographic tests regularly to check for internal malignancies, particularly of the gastrointestinal and genitourinary tracts. Patients need a regular colonoscopy for early detection of colorectal tumours. Cancers should be managed with appropriate anti-cancer therapies.

In some families, a genetic diagnosis can identify asymptomatic carriers of the mutation. All first-degree relatives, especially mutation carriers, should be referred from the age of 20 years for routine follow-up and early treatment

Treatment of the skin lesions includes:

Improvement of Torre-Muir syndrome has been noted in patients treated with sirolimus.