This quiz is about terminology in the diagnosis of melanoma. There are 10 cases. In all cases, dermoscopy reveals irregular, asymmetrical structure.

All clinicians should make it their business to look for melanoma in their patients, because they can and because early diagnosis saves lives. If a patient presents concerned about a lesion, take this seriously, and examine the entire skin surface carefully. The lifetime risk is about 5% for the European population of New Zealand.

Melanoma and melanoma mortality rates in New Zealand are among the world’s highest. Figures from the New Zealand Cancer Registry indicate there were 253 deaths (155 males) from melanoma in 2000. Melanoma is the most common registered cancer and the fourth most common cause of cancer death among the 15-44 year age group. The majority of melanomas (perhaps 90%) can be attributed to sun exposure.

The number of deaths from melanoma has been relatively stable in recent years (248 were registered in 1998). However, the numbers of registrations for melanoma is continuing to increase, with 1506 invasive melanomas diagnosed in 1998 and 1660 diagnosed in 2000. There were about the same number of in-situ lesions. The age-standardised rate of invasive melanoma was estimated at 33.6 in men and 32.2 in women per 100,000 of the population nationwide in 2000. It has been reported to be 59/100,000 in the Far North and perhaps as high as 70/100,000 in the Bay of Plenty and Taranaki.

The increasing incidence rates and stable mortality suggests we are getting better at diagnosing melanoma early. In most cases the cancer is readily visible on the skin, and 5-year survival rates are over 95% if the tumour is detected when its Breslow depth is less than 0.85 mm. However, delayed diagnosis and misdiagnosis occur all too frequently. Melanoma of the skin had a death to incidence ratio of 0.19 for males and 0.12 for females in 2000.

The use of dermoscopy in trained and experienced hands significantly increases the accuracy of diagnosis of melanoma (but may reduce accuracy in novices). If you have clinical doubt about a specific melanocytic lesion, refer to a dermatologist or to a mole mapping diagnostic service if available locally. Mole mapping is also appropriate for the patient with significant risk factors for melanoma.

For each of the ten cases, study the image(s) and then answer the questions. You can click on the image to view a larger version if required.

Each case should take approximately 2 minutes to complete. There is a list of suggested further reading material at the end of the quiz.

When you finish the quiz, you can download a certificate. 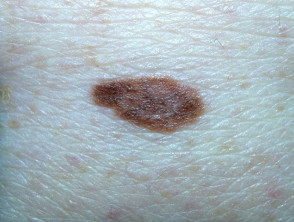 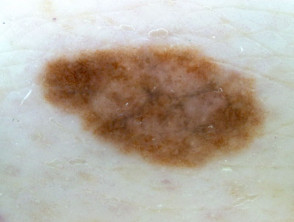