What is herpes zoster?

VZV is also called herpesvirus 3 and is a member of the Herpesvirales order of double-stranded DNA viruses. 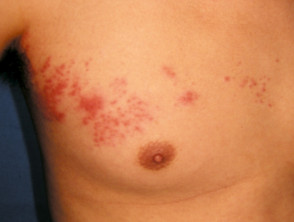 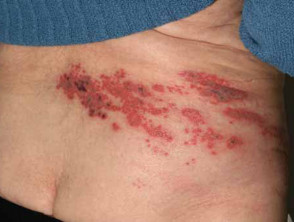 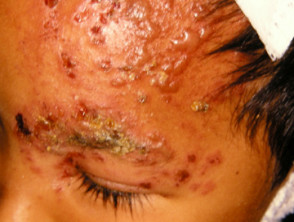 Who gets herpes zoster?

Anyone who has had varicella (chickenpox) may subsequently develop herpes zoster. Zoster can occur in childhood but is much more common in adults, especially older people. People with various kinds of cancer have a 40% increased risk of developing zoster. People who have had zoster rarely get it again; the chance of getting a second episode is about 1%.

After primary infection—varicella—VZV remains dormant in dorsal root ganglia nerve cells in the spine for years before it is reactivated and migrates down sensory nerves to the skin to cause herpes zoster.

It is not clear why herpes zoster affects a particular nerve fibre. Triggering factors are sometimes recognised, such as:

What are the clinical features of herpes zoster?

Herpes zoster is characterised by dermatomal distribution, that is the blisters are confined to the cutaneous distribution of one or two adjacent sensory nerves. This is usually unilateral, with a sharp cut-off at the anterior and posterior midlines.

The clinical presentation of herpes zoster depends on the age and health of the patient and which dermatome is affected.

The first sign of herpes zoster is usually localised pain without tenderness or any visible skin change. It may be severe, relating to one or more sensory nerves. The pain may be just in one spot, or it may spread out. The patient may feel quite unwell with fever and headache. The lymph nodes draining the affected area are often enlarged and tender.

Within one to three days of the onset of pain, a blistering rash appears in the painful area of skin. It starts as a crop of red papules. New lesions continue to erupt for several days within the distribution of the affected nerve, each blistering or becoming pustular then crusting over.

The chest (thoracic), neck (cervical), forehead (ophthalmic) and lumbar/sacral sensory nerve supply regions are most commonly affected at all ages. The frequency of ophthalmic herpes zoster increases with age. Herpes zoster occasionally causes blisters inside the mouth or ears, and can also affect the genital area. Sometimes there is pain without rash—herpes zoster "sine eruptione"—or rash without pain, most often in children.

Pain and general symptoms subside gradually as the eruption disappears. In uncomplicated cases, recovery is complete within 2–3 weeks in children and young adults, and within 3–4 weeks in older patients. 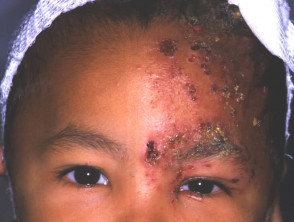 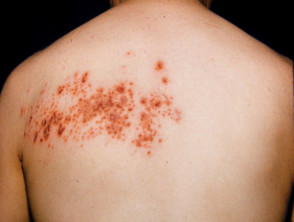 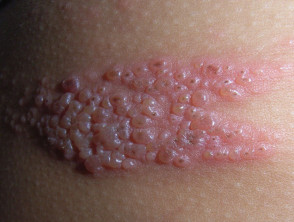 What are the complications of herpes zoster?

Herpes zoster is infectious to people who have not previously had chickenpox.

Post-herpetic neuralgia is defined as persistence or recurrence of pain in the same area, more than a month after the onset of herpes zoster. It becomes increasingly common with age, affecting about a third of patients over 40. It is particularly likely if there is facial infection. Post-herpetic neuralgia may be a continuous burning sensation with increased sensitivity in the affected areas or spasmodic shooting pain. The overlying skin is often numb or exquisitely sensitive to touch. Sometimes, instead of pain, the neuralgia results in a persistent itch (neuropathic pruritus).

What is the treatment of herpes zoster?

Because the risk of serious complications from herpes zoster is more likely in older people, those aged over 60 years might consider the zoster vaccine, which can reduce the incidence of herpes zoster by half. In people who do get herpes zoster despite being vaccinated, the symptoms are usually less severe, and post-herpetic neuralgia is less likely to develop. In New Zealand, the zoster vaccine will be funded from 1 April 2018 for people aged between 66 and 80 years old.

Herpes zoster vaccination is contraindicated in immunosuppressed patients due to the risk of it causing disseminated herpes zoster infection.

Antiviral treatment can reduce pain and the duration of symptoms if started within one to three days after the onset of herpes zoster. Aciclovir 800 mg 5 times daily for seven days is most often prescribed. Valaciclovir and famciclovir are also useful. The efficacy of prescribing systemic steroids is unproven.