Herpes simplex, varicella and herpes zoster infections show identical histology. Clinical correlation or immunohistochemistry and/or viral culture or PCR (of an appropriate swab or tissue specimen) is required to differentiate these viral infections.

The histology of herpes infections is very distinctive. The low power pattern of a typical lesion is of an intraepidermal blister (Figure 1). The key feature is acantholysis with solitary keratinocytes within the blister cavity (Figures 1,2,3). Keratinocytes will show nuclear changes in viral infection. These included margination of the nuclear chromatin, multinucleation and nuclear inclusions (Figures 3,4,5). The viral inclusions are small pink deposits with a clear halo seen within the nucleus. When present in herpes virus infection and present with the other nuclear changes of this infection they are called Cowdry Type A inclusions. Cowdry Type B inclusions are associated with other infections such as poliovirus and do not have the other nuclear changes of herpes infection.

Early changes of vacuolation in the cytoplasm may be seen along the basal keratinocytes. As the cells swell and separate, the cytoplasm becomes eosinophilic, particularly notable in the multinucleated cells. The inflammatory infiltrate is mixed, predominantly lymphocytes and neutrophils with scattered eosinophils frequently seen (Figure 6). 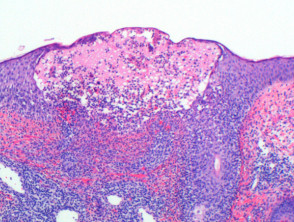 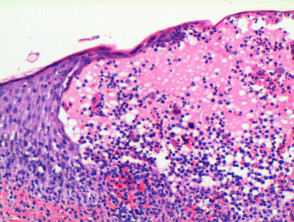 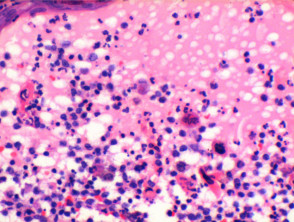 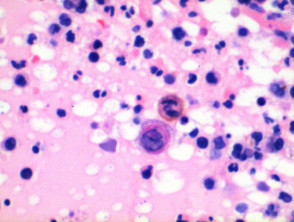 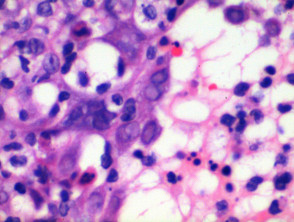 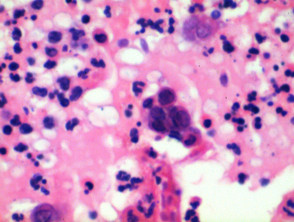 Herpes folliculitis: Changes in this variant can be subtle and hence easily overlooked particularly in early lesions or when the follicle is only partially represented. The key finding is of a necrotic hair follicle with an associated dense superficial and deep lymphocytic infiltrate with neutrophils. Typical viral changes can be seen in acantholytic epithelial cells of predominantly the infundibular region or in the involved adjacent epidermis.

Verrucous varicella and herpes zoster: In this variant, there is prominent hyperkeratosis and epidermal acanthosis in addition to the viral cytopathic changes.

Immunoperoxidase staining by a monoclonal antibody is available to herpes simplex types 1 and 2 and to varicella zoster. It is also possible to perform PCR and/or culture an appropriate specimen to distinguish between both herpes simplex and the herpes zoster viruses.

Pemphigus vulgaris: Clinically these conditions would be rarely confused. Suprabasal acantholysis is noted with vesicle formation in advanced lesions, and small numbers of acantholytic cells are seen within this space. Viral changes are lacking. However, it should be noted that disseminated herpes simplex virus infection (Kaposi’s varicelliform eruption) can complicate pemphigus vulgaris. In troublesome cases, immunofluorescence studies are usually decisive but if necessary the additional special studies noted above may also be used.

It is worth noting that a number of conditions have been reported to arise in the site of prior herpes zoster infection. These include chronic lymphocytic leukaemia, granuloma annulare, lichen planus, keloid scarring, vasculitis, sarcoidosis, morphea, lymphoma and skin cancers. The acute changes noted in viral infection are usually not evident.