Miliaria is a common skin disease caused by blockage and/or inflammation of eccrine sweat ducts. Miliaria is frequently seen in hot, humid, or tropical climates, in patients in hospital, and in the neonatal period. Miliaria is also known as heat rash, sweat rash or prickly heat.

Based on the level of the sweat duct obstruction, miliaria is divided into three types: 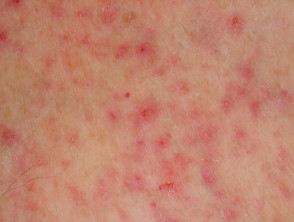 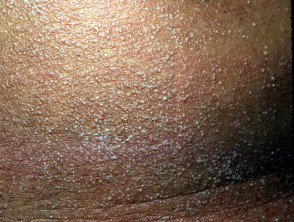 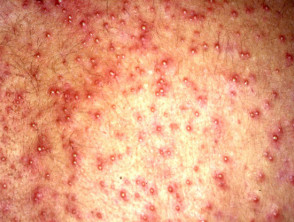 Heat rash can affect all age groups and racial groups.

Prickly heat results from sweating. The main contributing causes and risk factors are:

Other diseases and treatments that have been associated with miliaria are:

What are the clinical features of miliaria?

Symptoms of heat rash vary depending on type:

What are the complications of miliaria?

Complications of miliaria include:

How is miliaria diagnosed?

Heat rash is diagnosed on its typical clinical presentation.

In severe cases or repeated episodes, punch biopsy can be useful. Miliaria crystallina shows vesicles associated with the sweat ducts within or just under the stratum corneum of the epidermis. Histology of miliaria rubra shows spongiosis and spongiotic vesicles.

Tzanck smear taken from vesicles will distinguish miliaria from herpes simplex or toxic erythema of the newborn.

What is the differential diagnosis for miliaria?

Skin disorders presenting with papules, vesicles, or pustules that look similar to miliaria include:

What is the treatment for miliaria?

Resolution of miliaria requires minimising heat and humidity to reduce sweating and the avoidance of irritation to the skin. Strategies to avoid sweating, keeping the skin cool, and reducing irritation can help treat and prevent heat rash:

Heat rash may require medical care which can involve:

What is the outcome for miliaria?

Most cases of heat rash resolve within a day or two after changing to a cooler environment without any treatment or complications.