In acquired elastotic haemangioma, sections show prominent solar elastosis with a proliferation of dilated, fine endothelial-lined structures in the upper dermis forming a horizontal band (figure 1, 2). The deep margin of the proliferation is usually well defined. The endothelial lining is bland without multilayering or nuclear atypia (figure 3). 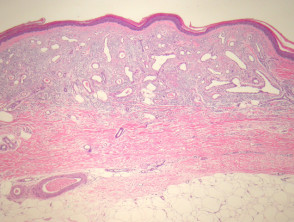 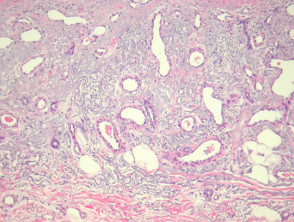 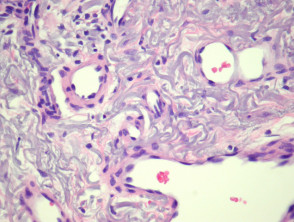 None are generally needed. Lymphatic markers are usually negative. CD31 and CD34 can highlight the blood vessels.

Low grade angiosarcoma — These can be deceptively bland. An infiltrative growth pattern, nuclear atypia and layering of endothelial cells are clues in diagnosing angiosarcoma.