Calcifying aponeurotic fibromas present at a young age on the hands and feet, as small nodular or infiltrative masses.

In calcifying aponeurotic fibroma, sections show an irregularly shaped dense mass of fibrous tissue with foci of calcification (figures 1, 2). The fibrous tissue is quite cellular and appears to infiltrate the surrounding adipose tissue (figure 1).

Rarely extramedullary haematopoiesis may be seen. 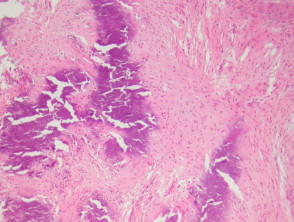 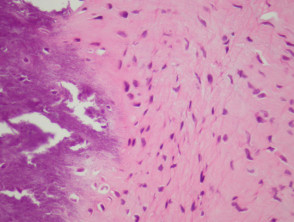