A deep biopsy to sample the subcutis is needed to make the diagnosis of calciphylaxis. The epidermis and dermis is often ulcerated and necrotic with numerous secondary changes (figure 1). There is calcification of small-medium sized vessels (figures 2-3). The intima of the vessels is commonly fibrosed and there may be intravascular thrombi. Diffuse calcification of small capillaries in the fat is a characteristic feature (figure 3). There may also be calcification of adipocytes. 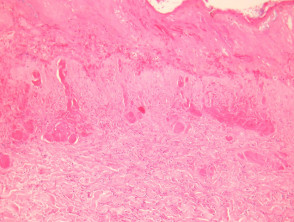 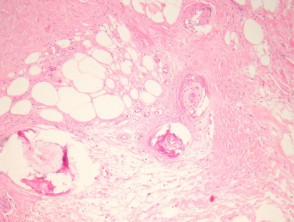 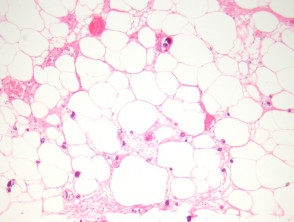 Calcium can be demonstrated with special stains such as Von Kossa.

A clinical history of renal failure and necrotic skin lesions can be helpful in providing confidence in diagnosing calciphylaxis.

Vascular calcification – May be seen associated with atherosclerosis and diabetes. Vascular thombosis and calcification of numerous capillaries/fat suggest calciphylaxis.