Cutis laxa is characterised by fragmentation of cutaneous elastic fibres, giving rise to loose, sagging skin which may give the appearance of premature aging. Heritable and acquired forms are described. In some cases extracutaneous sites are involved including the lung and gastrointestinal tract.

In cutis laxa, dermal elastic fibres are both altered and reduced in numbers; however, these changes may be difficult to appreciate on haematoxylin and eosin staining. Remaining fibres are shortened and may have a hazy appearance. Giant cells engulfing elastic fibre fragments and a mild perivascular lymphocytic infiltrate may be seen (Figure 1). 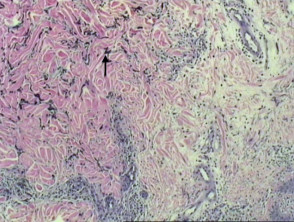 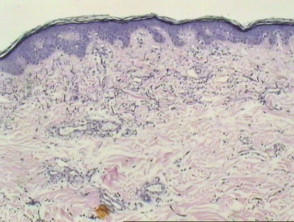 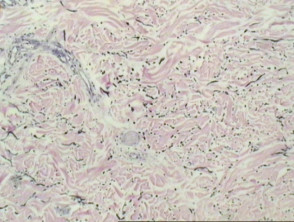 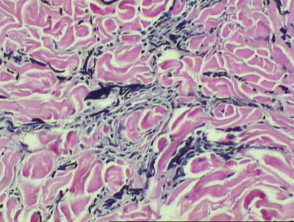 Electron microscopy confirms irregular fragmentation of the elastic fibre structure. Changes to collagen fibres has been reported, although is thought to be a secondary change due to alteration of the mechanics of the skin.

Anetoderma: Early lesions may show perivascular or periadnexal mononuclear inflammatory infiltrate in addition to fragmentation and loss of elastic fibres. Changes are more focal than the diffuse elastolysis seen in cutis laxa, however, this is difficult to appreciate on a small biopsy.

Pseudoxanthoma elasticum-like papillary dermal elastolysis: Primarily affects papillary dermis, although minor elastolysis and distortion of elastic fibres in the reticular dermis has been reported. Flattening of the epidermis is an additional feature.

The above conditions may be most easily differentiated from cutis laxa on clinical grounds.