Dermatomyofibroma was first described as a plaque-like dermal fibromatosis. It is a rare but distinct benign dermal proliferation of fibroblasts and myofibroblasts in the dermis.

Sections show a subtle, ill-defined, plaque-like dermal proliferation (figure 1). The cells are uniform, slender, spindle-shaped and bland. The cells contain evenly distributed chromatin or vesicular with small nucleoli and indentations is in keeping with a myofibroblastic line of differentiation. Characteristically, the cells are arranged parallel to the epidermis (figures 2, 3). 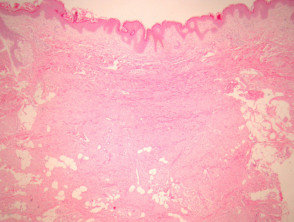 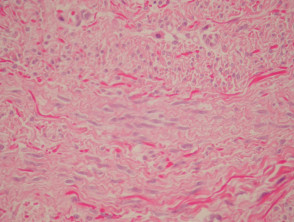 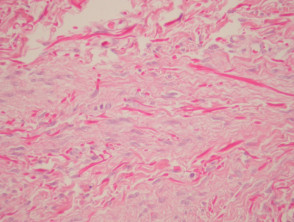 Immunohistochemically, neoplastic cells may express some actin and CD34 positivity. Elastic fibres are increased which can be demonstrated with elastic stains.