Otherwise known as collagenous fibroma, desmoplastic fibroblastoma is a benign tumour that presents as slow-growing masses in the subcutis and mainly occur in middle age. They have been described involving a wide range of anatomic sites but most commonly arise on the upper extremity.

Sections of desmoplastic fibroblastoma show a relatively well-circumscribed tumour in subcutaneous adipose tissue (figure 1). The tumour is composed of fibrous or slightly myxoid connective tissue with sparse interspersed spindled cells (figure 2). The vessels are inconspicuous but may show perivascular sclerosis. High magnification shows the spindle cells are bland, with some polygonal forms (figure 3). Mitoses are absent or extremely sparse. 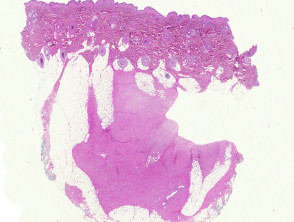 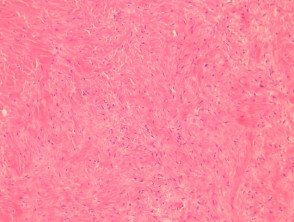 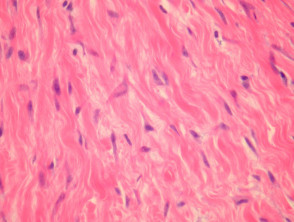 Neurofibroma – these may have a similar fibromyxoid matrix but the cells are wavy and more densely packed. S100 will be strongly positive in neurofibroma.

Low-grade fibromyxoid sarcoma – these are more cellular and the cells are often arranged in a whorled pattern.

Dermal scar – these are typically not as well circumscribed and may show inflammatory changes, granulation tissue or other reactive changes depending on the stage of the scar