Endocrine mucin–producing sweat gland carcinoma (EMPSGC) most commonly involves the eyelid of elderly women. Morphologically and immunohistochemically it is analogous to endocrine ductal carcinoma in situ of the breast and mammary solid papillary carcinoma. Interestingly, there is often associated invasive mucinous carcinoma with neuroendocrine differentiation.

In EMPSGC, sections show a dermally based tumour mass under an intact epidermis. It consisted predominantly of nodules of the tumour as well as cystic spaces somewhat reminiscent of a hydrocystoma (figures 1, 2, 3). Higher power reveals a uniform population of round-to-oval cells with fairly abundant pale and pink cytoplasm. The nuclei have fine stippled chromatin consistent with neuroendocrine differentiation (figure 4). Areas transitioning into mucinous carcinoma, with tumour islands floating in copious mucinous material may be seen (figure 5). 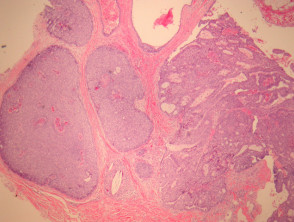 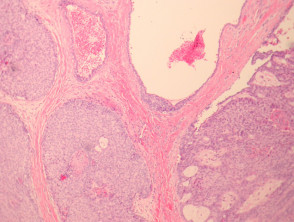 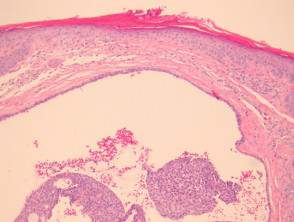 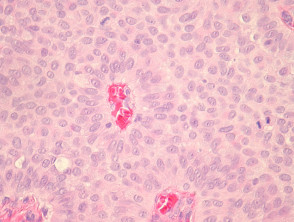 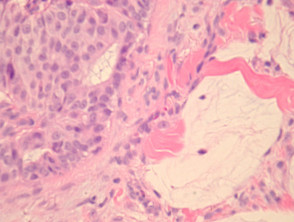 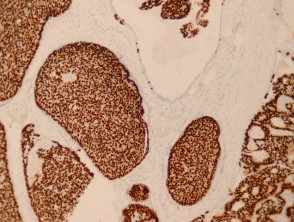 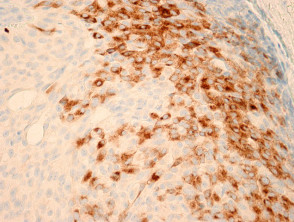 Immunohistochemical studies reveal the tumour is positive with oestrogen receptor (ER, Figure 6) and sometimes progesterone receptor. Neuroendocrine differentiation can be demonstrated with stains such as synaptophysin (figure 7) and chromogranin.

This tumour has been rarely reported in the literature, probably because it is under-recognised. It is possible many cases are reported as basal cell carcinoma. Immunohistochemical studies to demonstrate oestrogen positivity and neuroendocrine differentiation can be helpful. Accurate distinction is important as these tumours may recur and can be treated with therapy targeting oestrogen in inoperable cases.