Erysipelas is a distinctive type of rapidly spreading cellulitis which is caused by a group A streptococcal bacteria in the majority of cases. Similar eruptions arise rarely without infection in familial Mediterranean fever, and in patients with hereditary spherocytosis.

In erysipelas, there is impressive subepidermal oedema (figure 1) underlying an uninvolved epidermis. There is striking vascular ectasia. Beneath these changes there is initially neutrophilic infiltration and later mature but inflamed granulation tissue in the deep dermis/subcutis (figure 2). Abscess formation is not a feature. 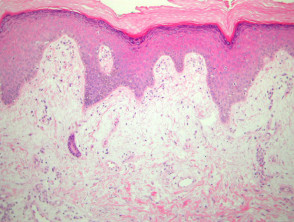 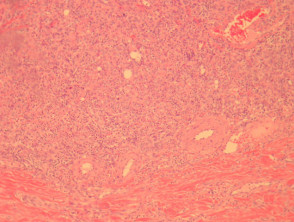 Special stains usually fail to reveal organisms but the causitive gram positive cocci may be found. Direct immunofluorescence has been used to demonstrate streptococcal species.

Erysipeloid – Usually found on the hands following abrasion and introduction of Erysipelothrix rhusiopathiae. As opposed to erysipelas there is often epidermal vesiculation.