What is erythema annulare centrifugum?

Erythema annulare centrifugum is an idiopathic skin disorder characterised by red, ring shaped lesions with central clearing. It is also called annular erythema. Lesions may be classified into superficial or deep subtypes. Deep lesions are more elevated, with less scale and pruritus than superficial lesions. There are associations with various infectious agents, medications and autoimmune disease. However, the majority do not have an underlying disorder.

Superficial types of erythema annulare centrifugum have epidermal changes including mild spongiosis, parakeratosis and microvesiculation. Characteristically there is a tight lymphohistiocytic infiltrate surrounding superficial vessels known as the coat-sleeve anomaly. 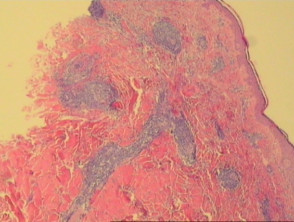 Vasculitis: The tight perivascular aggregate in erythema annulare centrifugum may extend into vessel walls, however, in contrast with true vasculitis there is no fibrin extrusion.