Giant cell fibroblastomas are skin and soft tissue tumours that usually arise in childhood. They are sometimes seen in association with dermatofibrosarcoma protuberans (DFSP, hybrid lesions) or may transform or recur as DFSP.

In giant cell fibroblastoma, the tumour is based in the dermis or subcutis. There are striking sinusoidal spaces mimicking blood vessels coursing through the tumour which is set in a myxoid, loose or sclerotic stroma (figure 1). Closer examination reveals the tumour is composed of epithelioid, stellate and spindled cells with occasional multinucleated forms (figures 2, 3). These cells often line the ecstatic vascular spaces. Mitoses are usually rare. 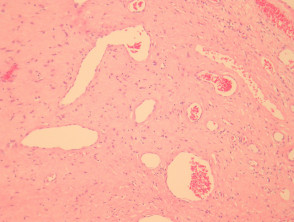 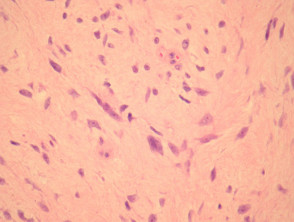 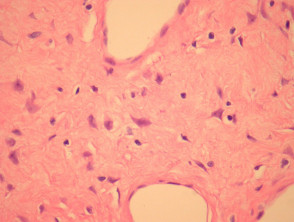 Immunohistochemical studies reveal the multinucleated cells are positive with CD34. The same gene abnormality seen in DFSP is seen in these tumours (PDGFB and COL1A1).