Hidradenocarcinoma is a rare sweat gland carcinoma, which has been described in a wide age range and at a wide range of anatomic sites. These tumours may behave in an aggressive fashion and wide surgical excision is the treatment of choice.

Hidradenocarcinoma may arise within a pre-existing hidradenoma. Hidradenocarcinomas are often large nodular dermally based tumours which may invade the subcutaneous fat (figure 1) and irregularly infiltrate the surrounding dermis (figure 2). The tumour cells are epithelioid and may often show clear cell changes (figure 3), or may appear basaloid, or have an eosinophilic cytoplasm (figure 1). There may be foci of squamous differentiation and duct formation (figure 2). There may be necrosis (figure 4).

Hidradenocarcinoma may metastasize widely (figure 5 shows a tumour deposit in the lung). 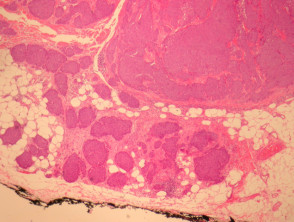 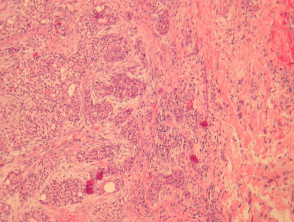 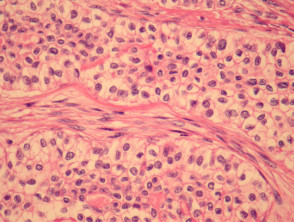 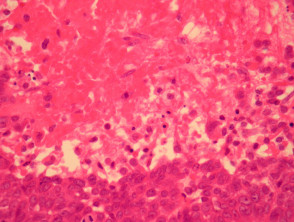 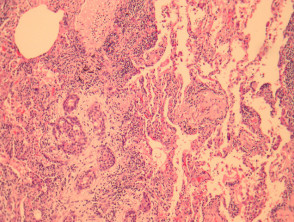 The diagnosis of hidradenocarcinoma is usually made on morphologic grounds. These tumours are generally positive with CK7. Ductal differentiation may be demonstrated with markers such as CEA.

Nodular hidradenoma – Hidradenocarcinoma may be deceptively bland and mimic benign hidradenoma. Invasion of subcutis, lymphovascular invasion, an infiltrative growth pattern, and large clinical size are some features to point to a malignant diagnosis. Given the diagnostic difficulty, many authorities recommend complete surgical excision of all hidradenomas.