Flegel disease is a rare dermatosis characterized by asymptomatic hyperkeratotic papules predominantly on the dorsa of the feet and lower legs. Clinical input is often very helpful in making a diagnosis histopathologically. The disorder is thought to be caused by alterations in the membrane-coating granules (lamellar granules, Odland bodies) of the keratinocytes

In Flegel disease, sections show discrete zones of compact lamellar hyperkeratosis with focal parakeratosis (figure 1). The epidermis under the hyperkeratosis is atrophic compared with the surrounding skin, and the granular layer is attenuated absent (figure 2). The papillary dermis contains a dense band-like infiltrate composed of small lymphocytes intermingled with histiocytes. Vasodilation of superficial vessels is also seen (figure 3). 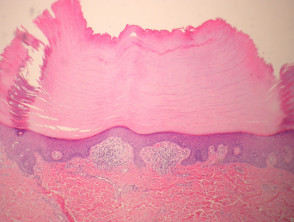 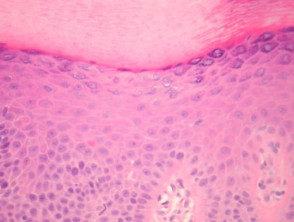 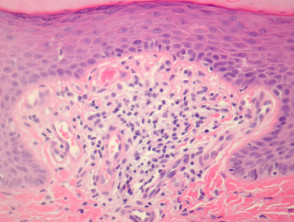 None are generally needed. Examination of the membrane-coating granules by electon microscopy is commonly reported in the literature but is not considered useful for the diagnosis.

Kyrle disease – This condition is clinically similar and may share some pathogenic components. Kyrle disease should exhibit an impressive keratin plug and inflammatory material perforating through the epidermis.