Inflammatory myofibroblastic tumour (IMT) rarely presents in the skin as a slow-growing dermal tumour. Many tumours show translocation of the ALK gene. Some of these tumours were labelled 'pseudotumours' or 'plasma cell granuloma' in the past.

Histologically, the lesion is based in the dermis and seen underlying a normal epidermis (figure 1). The tumour is composed of an admixture of spindle-shaped and ovoid cells with a prominent inflammatory infiltrate (figures 2–3). The infiltrate is characteristically rich in plasma cells (best seen in figure 2). There may be some pleomorphism of the tumour cells and some mitotic figures (figure 3, arrow). 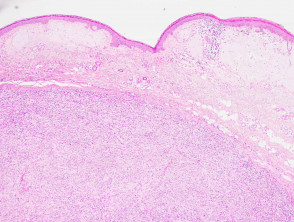 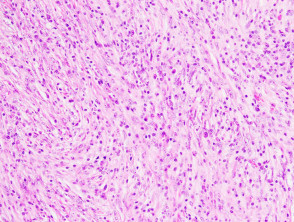 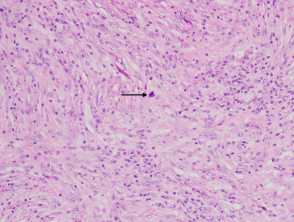 The tumour cells stain strongly with vimentin and variably with smooth muscle markers. SMA is positive in up to 90% of cases. ALK (anaplastic lymphoma kinase) immunohistochemistry is seen in the majority of cases and when seen is practically diagnostic in the correct context. FISH testing for ALK-gene rearrangements may also be used.

Pseudotumour and plasma cell granuloma - These lack significant atypia and ALK gene translocations. Many IMTs were labelled pseudotumours in the past.