Merkel cell carcinoma is an aggressive tumour that usually arises on chronically sun exposed skin of the elderly. Ultraviolet radiation , immunosuppression and the Merkel cell polyomavirus (MCPyV) are thought to be causative factors. The cell of origin remains debatable but the immunohistochemical profile and morphology resemble native Merkel cells in the skin.

Merkel cell carcinoma is a neuroendocrine carcinoma composed of densely blue cells. The tumour is centered in the dermis with frequent involvement of the overlying epidermis (figures 1, 2) and may invade the subcutaneous fat. The tumour forms sheets, nests and rarely ribbons. The outlines of the cells often mold together or resemble lymphocytes (figures 3, 4). There are numerous mitoses, and there may be necrosis. Lymphovascular invasion is common. 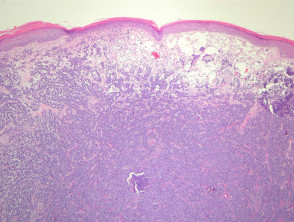 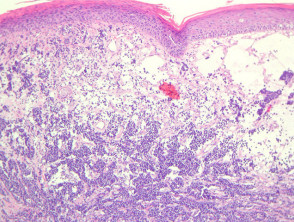 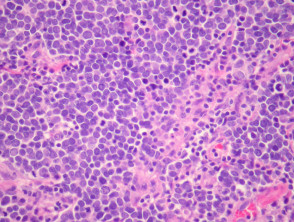 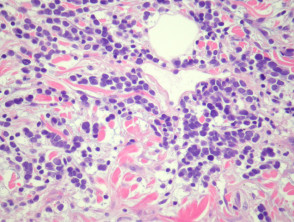 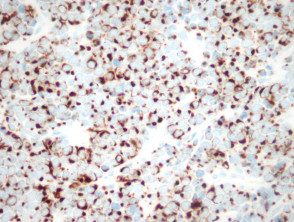 Merkel cell carcinoma is negative for S100 and other melanoma markers.

p63 has emerged as an immunohistochemical stain which has been shown to provide some prognostic information. Strong diffuse staining is thought to be a negative prognostic feature.

Basal cell carcinoma – As Merkel cell carcinoma may form islands of densely blue cells it may be misdiagnosed as a basal cell carcinoma. Close examination of the cells to reveal the high grade neuroendocrine differentiation and –if necessary- immunohistochemical studies may be useful in providing accurate distinction.