Monkeypox is a rare disease caused by the DNA monkeypox virus (also known as mpox and MPV). The monkeypox virus belongs to the Orthopoxvirus genus — the same family of viruses as cowpox and smallpox. Infection with the MPV virus causes a rash similar to that of chickenpox.

Monkeypox gets its name from the discovery of the virus in monkeys under investigation in a research lab in Denmark in 1958. The first reported infection of humans was in the Democratic Republic of the Congo in 1970.

There are two principal strains (clades) of the monkeypox virus that produce sporadic outbreaks in Africa (numbering 1 to 2 thousand cases a year); a more virulent strain in the Congo basin and a milder strain in West Africa. In endemic areas, most sufferers are thought to acquire the disease from exposure to infected animal carcasses, meat, or blood (animal-to-human transmission). The average age at presentation has increased in the last two decades from 4 to 21 years. The disease is most frequent in the Democratic Republic of the Congo.

Isolated outbreaks outside Africa have mostly been related to infected animal importation but person-to-person spread has increased via direct contact with body fluids, large respiratory droplets, and contaminated linen and bedding being implicated in transmission.

As of late July 2022, the majority of cases (86%) are from the European region (approx. 2900 cases) followed by the Americas (approx. 380), African region (73), Eastern Mediterranean Region (15), and Western Pacific Region (11). Person-to-person spread is evident from close physical proximity or sexual activity, predominantly in men who have sex with men. So far all cases have been linked to the less virulent West African strain.

The disease may become more common since administration of the smallpox vaccine, which confers cross-protection, was discontinued in the 1970s.

What are the signs and symptoms of monkeypox?

The incubation period from infection to prodromal symptoms of monkeypox is 12 days.

In the first 5 days of the infection, patients experience 'flu-like' symptoms including:

After this period, a rash similar to that seen in chickenpox develops:

The rash begins as 2–5 mm diameter maculopapules, which evolve into:

Symptoms usually last for 14 to 21 days; the rash lasts for approximately 10 days.

A large series of sufferers from the 2022 outbreak in Spain were reported at the time of writing (August 2022). Many of those affected had few lesions, often only in a single area. Lesions often started on the genitals, face, arms, hands, and perianal area.

Rather than true pustules, pseudo-pustules, which were solid, white, and raised without a top layer that could be scraped off to release pus, were described. Pseudo-pustules are extremely rare in other infections and this is a crucial diagnostic sign. Lesions progressed to small ares of skin necrosis then ulcers; finger lesions produced monkeypox whitlows. 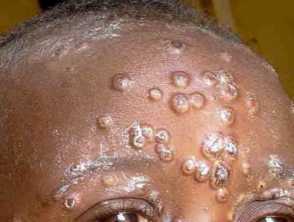 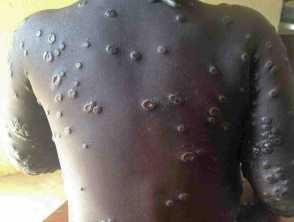 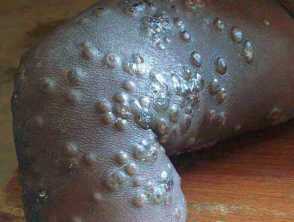 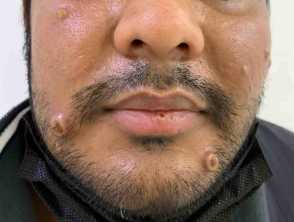 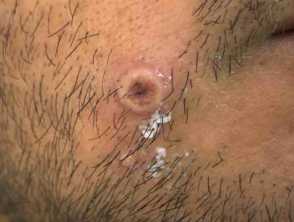 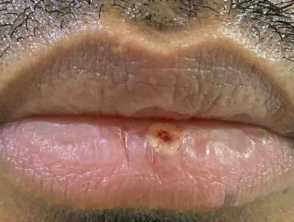 How is monkeypox diagnosed?

The prodromal features, coupled with the development of lymphadenopathy, and the chickenpox-like rash should alert suspicion. Unlike chickenpox, lesions may be present on the dorsal hands and feet, palms, and soles.

Virological confirmation can be made by:

What is the differential diagnosis for monkeypox?

What is the treatment for monkeypox?

With the increased awareness of person-to-person transmission, particularly during the 2022 outbreak, cases should be isolated and contact tracing initiated. Close contacts of infected individuals require isolation for 21 days.

Specific antiviral therapy with cidofovir or a newer agent, tecovirimat may be indicated in those at high risk, or those with severe disease.

Smallpox vaccination offers significant protection (85%) against the related monkeypox virus; the risk-benefit of vaccination should be considered for high-risk contacts. Newer two-dose Ankara strain vaccinations have been licenced for prevention of monkeypox since 2019 in the United Kingdom.

In recent years, the mortality of monkeypox has ranged from 3–6%, with infants and the immunocompromised having higher mortality.

There were no deaths in the 2003 USA outbreak, and severe illness requiring hospitalisation only occurred in 2 young children.