Primary cutaneous mucinous carcinoma is a distinctive tumour that has been variously described as apocrine and eccrine. The most frequent described presentation has been a slow-growing dermal mass arising on the head and neck of older adults.

In mucinous carcinoma, there is a dermal mass composed of glands and solid nests of epithelial cells which appear to be floating in copious mucin (figures 1–3). The cells are enlarged, show mild pleomorphism and often have an eosinophilic cytoplasm (figure 3). 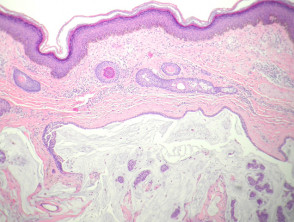 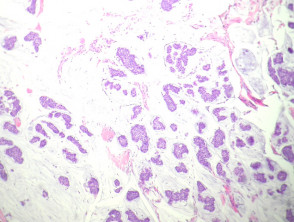 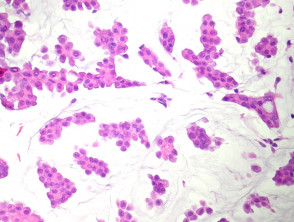 Immunohistochemical studies reveal the tumour is positive with CK7, and may express ER (oestrogen receptor) and PR (progesterone receptor). p63 and CK5/6 may highlight a population of myoepithelial cells and help to distinguish this tumour from a cutaneous metastasis from another site.

Endocrine mucin-producing sweat gland carcinoma – This tumour is thought by some authors to represent precursors to mucinous carcinoma. They are composed of solid nests of cells which exhibit some neuroendocrine differentiation. These tumours arise almost exclusively in the skin surrounding the eye