Mycetoma is a chronic suppurative and/or granulomatous inflammatory lesion of skin, subcutaneous tissue, fascia, and tendons caused by the traumatic inoculation of either fungal (eumycotic) or bacterial (actinomycotic) organisms. At present, about 33 species are substantiated as agents of mycetoma; of which 23 are eumycotic and 10 are actinomycotic.

Histopathologic examination of mycetoma has a marked inflammatory response, scarring, suppuration, ulceration and epithelial hyperplasia (figure 1). The inflammatory response surrounds the ball of organisms “grains”. The morphology of the grains depends entirely on the causative organism. The illustrated example is Aspergillus niger in which the pigmented septate hyphae are wide and branching and in some areas there were well formed fruiting conidial heads (figure 2, PAS stain). This patient was immunecompetent and presented with a large draining inflammatory mass on the leg. 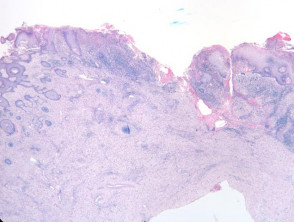 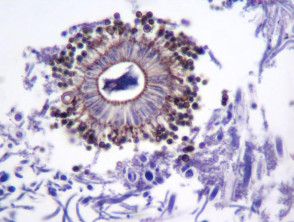 GMS or PAS stain the hyphae in mycetoma and highlight fungal morphology of eumycetoma (figures 2, 3).

Disseminated infections – Mycetoma forms a discrete mass or localized masses in the skin and soft tissues with draining sinuses through to the overlying skin. Histopathologically mycetoma will demonstrate a “grain” or mass of organisms surrounded by an inflammatory reaction. A disseminated infection will have a diffuse pattern of invasion (often with vascular invasion).