Myofibroma is a benign fibrous tumour. It is most commonly a solitary lesion arising in the first 2 years of life, when it is also called solitary infantile myofibroma. It is thought to be of myofibroblastic origin.

Low power view of myofibroma demonstrates a well defined multinodular tumour arising in the deep dermis or subcutis (Figure 1). Also at low power a branching ‘staghorn’ like pattern of blood vessels can be seen between the tumour nodules (Figure 2). Areas of calcification can often be seen (Figures 2, 3 and 5). The tumour nodules are comprised of a spindle cell proliferation with short plump nuclei (Figures 4,5 and 6). A basophilic tinge in the spindled peripheral component of the nodules is evident (Figures 7 and 8). Sclerotic collagen in the centre of the tumour nodules gives a biphasic appearance to the tumour (Figure 9). 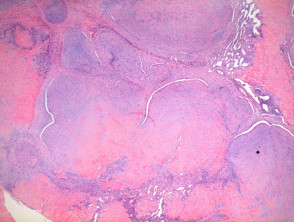 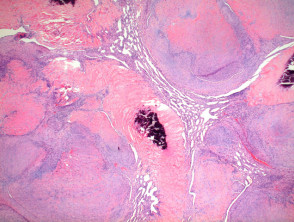 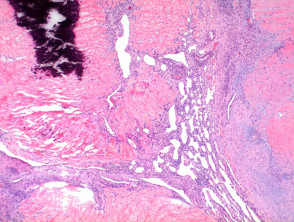 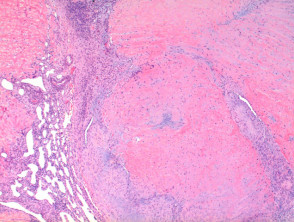 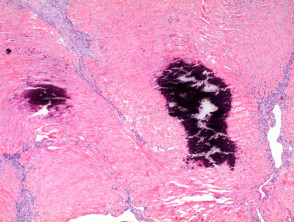 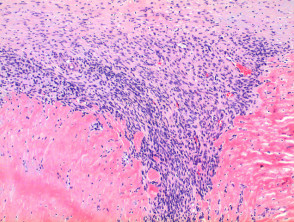 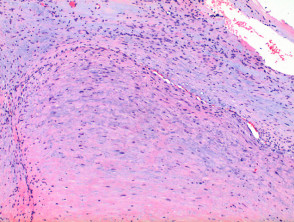 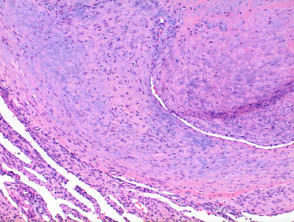 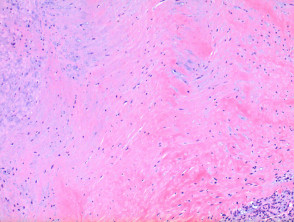 Multiple congenital myofibromas: May be seen with or without systemic involvement. Visceral involvement portends a poor prognosis.

Myopericytoma: There is significant overlap with this tumour and they may fall along a spectrum. A concentric perivascular proliferation favours myopericytoma, whereas a biphasic appearance with hyalinised paucicellular areas favours myofibroma.