Nodular fasciitis presents as a rapidly growing soft tissue mass which may follow a history of trauma.

The tumour is composed of haphazardly arranged mass of spindled and plump cells which is often compared to tissue culture. The cells are set in a fibromyxoid stroma. Some typical mitoses are commonly seen. There may be numerous red blood cells (figure 2), and chronic inflammatory cells. Proliferative fasciitis is a well recognized variant and is composed of epithelioid cells which resemble ganglion cells (figure 3). 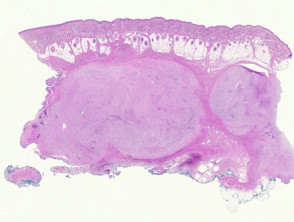 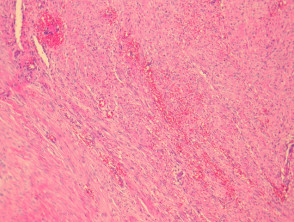 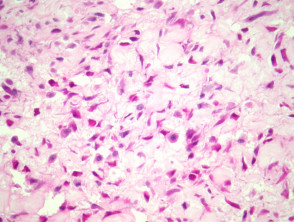 The myofibroblasts are positive with smooth muscle actin, calponin. Desmin and S100 are negative

Sarcoma – Atypical mitoses, tumour necrosis and frank nuclear atypia are unusual in nodular fasciitis and suggest a malignant process. Low grade sarcomas (such as low grade fibromyxoid tumour) may cause diagnostic difficulty but generally do not exhibit the tissue culture-like disorganized array of myofibroblasts.