Incomplete closure of the omphalomesenteric duct (also known as the vitelline duct) may present in the skin in a variety of forms: a patent duct/fistula causing fecal drainage at the umbilicus, a cutaneous cyst, or an umbilical polyp in which enteric mucosa is present without connection with an underlying cyst or duct.

Umbilical polyps show enteric mucosa in direct continuity with the adjacent epidermis (figures 1, 2). The mucosa is usually small bowel. Gastric mucosa is also sometimes seen (as seen in figure 2). Patent ducts and cysts show the enteric mucosa forming a cyst or a tubular structure coursing through the dermis respectively. 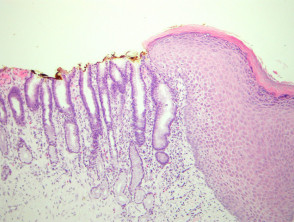 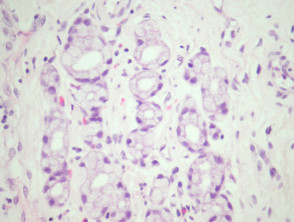 None are generally needed. The diagnosis of an umbilical polyp cyst should prompt clinical exclusion of an underlying patent duct.

Urachal cyst/fistula — Failure of complete urachal lumen closure causes urachal cysts or free communication between the bladder and the urachus in which urine leaks from the umbilicus. These are lined by urothelium, cuboidal, flat or atrophic epithelia rather than enteric mucosa