Paracoccidioidomycosis is caused by Paracoccidioides brasiliensis. It occurs mainly in Latin America or individuals who have travelled to that region.

The dermis shows an acute inflammatory and granulomatous reaction pattern (figure 1). The granulomas are quite well formed and may be surrounded by a dense fibroplasia. Even at low power, numerous fungi can be seen within giant cells and surrounded by inflammation (figure 1). There may be overlying epidermal pseudoepitheliomatous hyperplasia.

Higher power examination reveals large round fungal forms. There may be numerous eosinophils. The characteristic feature of this organism is the presence of multiple minute narrow-based buds surrounding the large round fungal forms. These have often been referred to as 'captain wheels' (figure 2, 3; arrows highlight the 'captain wheel' formation). 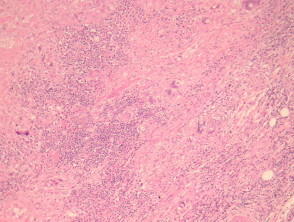 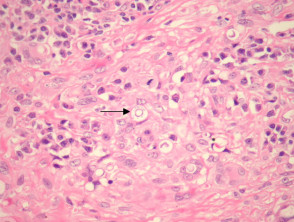 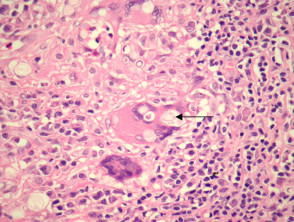 The morphology of the fungus can be seen on routine haematoxylin-eosin sections. GMS stain can be helpful to highlight the organism. PCR may be also used to classify the organism.

Blastomycosis – the fungal forms of blastomycosis are similar in size but have a thicker wall and do not exhibit the 'captain wheel' budding formation (figures 2, 3, arrows). Rather, they exhibit broad-based buds.