Pemphigus foliaceus is grouped within the intraepidermal blistering disorders.

In the dermis there is a predominantly superficial lymphocytic infiltrate with scattered eosinophils (Figure 3). Neutrophils may be more common in the IgA subtype.

If there is clinical suspicion for pemphigus folicaceous but little to see on first inspection, remember to assess the hair follicles, as early changes may be seen here. 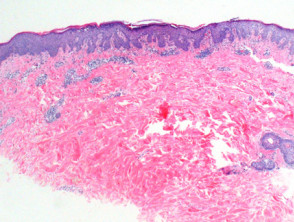 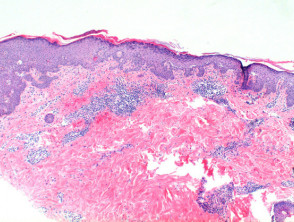 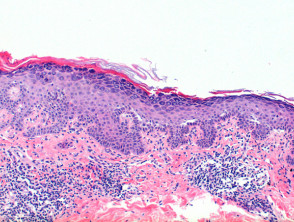 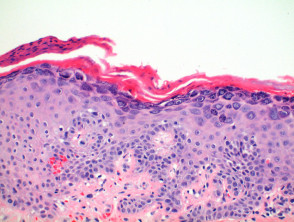 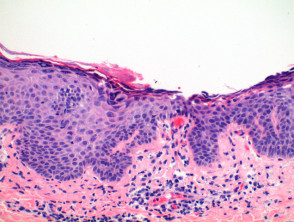 Direct immunofluorescence is a critical component of the workup, but requires a separate specimen transported in appropriate media. A positive result is the presence of intercellular IgG and C3 predominantly within the superficial layers of the epidermis (Figure 6). 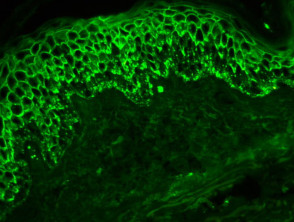 Pemphigus erythematosus: In this variant the histology is that of pemphigus foliaceus, with the additional immunoflouorescence finding of basal membrane IgG +/- C3 in addition to the intercellular distribution. Antinuclear antibody studies are also frequently positive.

IgA pemphigus: Typically there is a more prominent subcorneal neutrophilic infiltrate forming pustules. When there is only minor vesicle formation the clue to this diagnosis is in the predominance of neutrophils. Immunofluorescence show intercellular IgA deposition.

Pemphigus vulgaris: In this related condition intraepidermal acantholysis is seen within the lower suprabasal epidermis, with matching direct immunofluorescence at this level.

Acantholytic actinic keratosis: In this condition there is prominent atypia of the keratinocytes, with acantholysis frequently present through all layers of the involved epidermis. Discrimination may be difficult when pemphigus foliaceus is seen on markedly solar damaged skin.

Staphylococcal scalded skin syndrome: In this acute condition there is widespread subcorneal separation, typically with complete absence of the stratum corneum without prominence of the granular layer and minimal inflammatory infiltrate.