Grouped as a benign epithelial tumour, lesions of porokeratosis may arise in isolation, as multiple lesions or in a particular distribution in some clinical variants. The histology is reproducible on each occasion.

Scanning power view of porokeratosis reveals a hyperkeratotic lesion with a discrete parakeratotic column at the margin, or two if the whole lesion is represented (Figure 1). The diagnostic feature is the presence of a cornoid lamella which represents the clinically visible raised margin of the lesion. The cornoid lamella is a parakeratotic column overlying a small vertical zone of dyskeratotic and vacuolated cells within the epidermis (Figures 2 and 3). There is also a focal loss of the granular layer. A mild lymphocytic infiltrate may be seen around an increased number of capillaries in the underlying dermis. 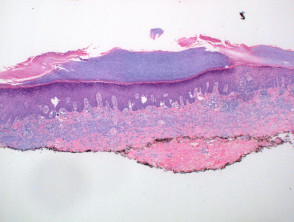 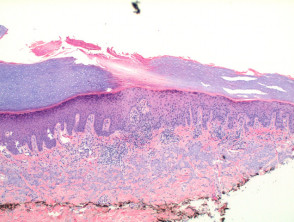 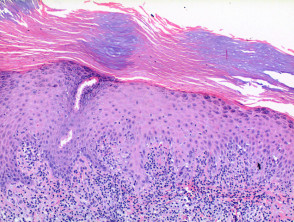 Porokeratosis of Mibelli: This prototypical lesion may demonstrate a depression in the epidermis beneath the cornoid lamella.

Disseminated superficial actinic porokeratosis: The intervening epidermis between the two cornoid lamellae may be thinned and show a prominent lichenoid or superficial perivascular lymphocytic infiltrate.

Porokeratotic adnexal ostial nevus: In this clinically distinctive variant, cornoid lamellae are seen to overly the eccrine or follicular ostia.

Porokeratosis ptychotropica: Scanning power view demonstrates a unique pattern of multiple cornoid lamella, which may be partially represented at different levels of the epidermis and arrayed at variable angles in relation to the epidermis (figure 4). Dermal amyloid deposition is seen commonly, particularly in proximal intertriginous areas, which may suggest a role for friction in its aetiology.

Pigmented porokeratosis: This lesion clinically may present as a pigmented lesion as so caution is needed not to overcall this as a melanoma. If partially biopsied you will need to have a high index of suspicion to ensure a correct diagnosis. Histologically there is melanocytic hyperplasia and dermal melanophages (figure 5). There is sharp demarcation at the cornoid lamella, which can be demonstrated with melanocytic markers (figure 6, MelanA). 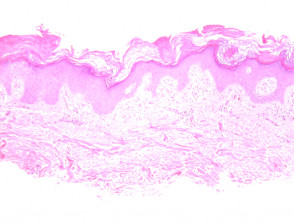 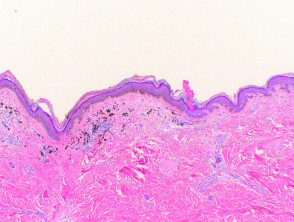 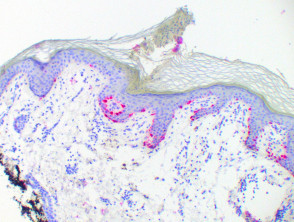