Prurigo pigmentosa is a rare dermatosis most commonly described in young Asian women. It presents as an intensely pruritic papular eruption, which resolves with reticulated pigmentation.

In well established prurigo pigmentosa, histopathologic examination reveals a sparse lichenoid infiltrate which also involves the superficial plexus and parakeratosis (figure 1). There are numerous dermal melanophages in later stages (figure 2). High power examination shows the lichenoid reaction is associated with apoptotic and necrotic keratinocytes present at all levels of the epidermis (figure 3). It is quite common to find a suppurative folliculitis and often hair follicles are filled with bacteria (figure 4).

In earlier stages of prurigo pigmentosa, there may be numerous neutrophils and eosinophils, sometimes forming abscesses in the epidermis.

The histological features of prurigo pigmentosa have been compared to those of pityriasis lichenoides. 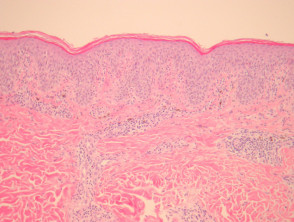 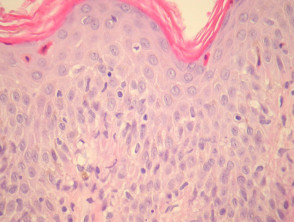 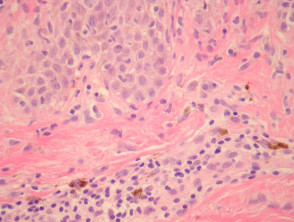 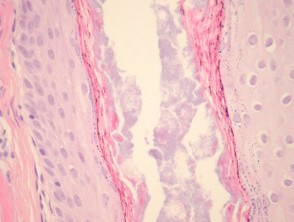 Pityriasis lichenoides – The features may be very similar. Clinical correlation is sometimes needed

Other lichenoid disorders – Clinical correlation can be very helpful