Radiation dermatitis presents at the site of previous radiotherapy for cancer or following accidental exposure to radiation.

Chronic radiation dermatitis shows dermal sclerosis, elastosis and vascular ectasia overlying an epidermis which is often hyperkeratotic (figure 1). There may be epidermal spongiosis or impressive basal vacuolar change (figure 2). The dermal vessels are typically quite dilated in later stages (figure 3). Both the stroma fibroblasts and endothelial cells may show some hyperchromasia, enlargement and atypia (radiation fibroblasts, figure 3). There is often a mixed inflammatory response. 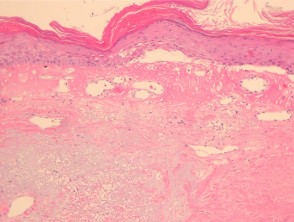 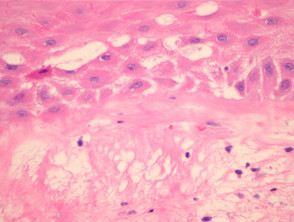 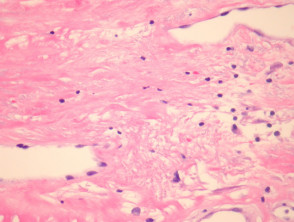 Malignancy – Radiation dermatitis is often biopsied to exclude recurrent carcinoma or angiosarcoma which has been increasingly described following breast irradiation. The atypical fibroblasts and endothelial cells may be confused with malignancy.

Morphoea – Morphoea generally lacks radiation fibroblasts. Radiation induced morphoea can closely mimic radiation dermatitis and there may be cross-over in some cases.