The low power view of perforating collagenosis shows an invaginating epidermal process (Figure 1). There is hyperkeratosis overlying a cup shaped depression or invagination in the epidermis. There is prominent epidermal hyperplasia, which encompasses a central basophilic plug of keratin, collagen and inflammatory debris (Figure 2). On careful sectioning, this is continuous with altered collagen in the underlying dermis, which is being expelled by the process of transepidermal elimination. Within the epidermal plug bright eosinophilic altered collagen fibres can be seen (Figures 3 and 4). 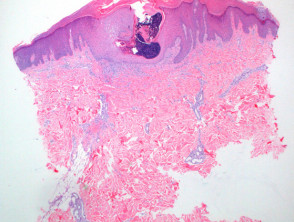 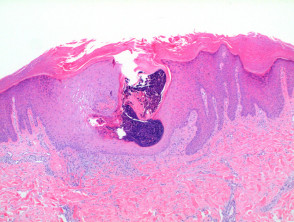 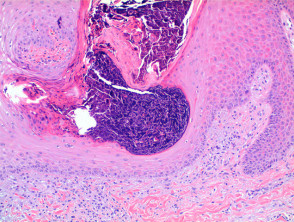 EVG staining highlights elastic fibres, so in this condition should not show black fibres transgressing through the focus of transepidermal elimination.

Traumatic collagen perforation: Following traumatic erosion of the epidermis, altered collagen fibres in the superficial dermis can appear to be perforating residual epidermis. This is a secondary phenomenon not uncommonly encountered in lesions of prurigo nodularis. Broad areas of epidermal erosion with adjacent epidermal hyperplasia and vertically oriented dermal fibrosis indicating chronic prurigo are clues to the underlying cause.

Kyrle disease: Strictly in this condition the material being ‘perforated’ is inflammatory debris from the dermis and not collagen or elastic tissue. As mentioned in the introduction, overlap with reactive perforating collagenosis exists.

Elastosis perforans serpiginosa: Here the extruded fibres are elastin and will stain positive with EVG staining.