The scanning power view of squamous cell carcinoma in situ (SCCIS) reveals epidermal alteration (Figure 1). Closer inspection reveals atypia of the keratinocytes across the full thickness of the epidermis (Figures 2 and 3). There is a loss of the granular layer and overlying zones of parakeratosis. Sparing of the adnexal ostial epithelium is commonly seen (Figure 3). The keratinocytes show cytologic atypia with disorderly maturation. 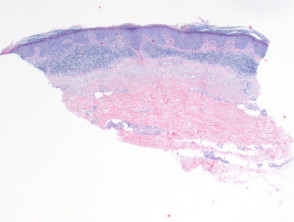 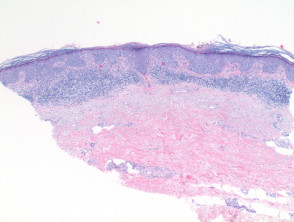 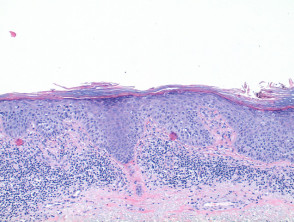 Pigmented SCCIS shows increased melanin deposition throughout the epidermis and also as melanophages within the superficial dermis.

Pagetoid SCCIS is characterised by discrete enlarged solitary and nested atypical keratinocytes scattered through the upper layers of the epidermis. This mimics Paget disease and melanoma in situ. Immunoperoxidase staining is discriminatory in difficult cases.

Clear cell SCCIS shows cytoplasmic clearing. It may show features of outer root sheath differentiation, and the presence of human papillomavirus has been suggested to contribute to its aetiology.

Paget disease: The changes can mimic the pagetoid variant of SCCIS. Immunostaining should be used in inconclusive cases. Pagetoid SCCIS will be broad spectrum Cytokeratin positive while typically negative for CK7. CFTR positivity has also been suggested to support the diagnosis of extramammary Paget's disease.

Bowenoid papulosis: This entity may well represent Bowen disease on the genitalia, and is typically histologically indistinguishable. Suggested differentiating features in bowenoid papulosis include increased metaphase mitoses and the presence of small basaloid inclusions within keratinocytes of the granular layer.