This lymphoma is one of the primary cutaneous T-cell lymphomas.

Scanning power view demonstrates lobular panniculitis (Figure 1). Relatively little dermal or epidermal involvement is seen (Figure 2). A dense infiltrate is seen predominantly within the fat lobules while some spillover into the septal panniculus may be seen (Figure 3). Germinal centre formation is rare. The infiltrate is predominantly lymphocytic with variable numbers of histiocytes engulfing nuclear debris (bean bag cells) and lipid (lipophages) (Figures 4 and 5). The lymphocytes demonstrate nuclear atypia and can be seen to characteristically rim the adipocytes (Figure 6). 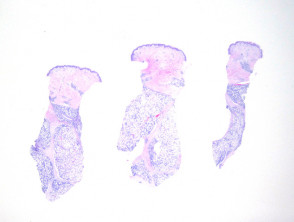 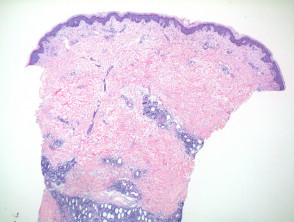 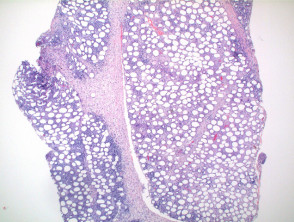 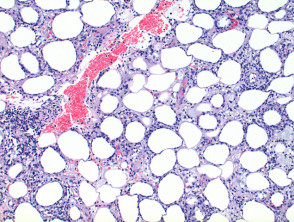 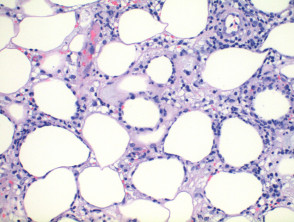 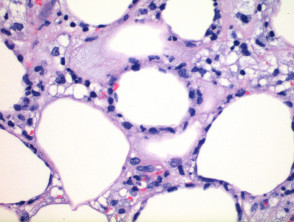 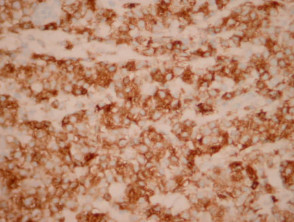 Immunohistochemistry is required to determine the cell lineage. The infiltrate is predominantly a CD8 positive T-cell infiltrate (Figure 7) which express cytotoxic markers. T-cell receptor status is α/β. CD56 and CD30 are very rarely positive. T-cell gene rearrangement regularly shows a clonal infiltrate though a polyclonal result does not exclude this diagnosis.

Lupus profundus: Discrimination can be exceedingly difficult in some cases and overlap of these two conditions occurs. In lupus profundus, helpful features in the panniculus include the formation of germinal centres and hyalinisation of the fibrous septae. The presence of plasma cells and increased CD4 and CD20 positive lymphocytes also favour lupus profundus.