Syringofibroadenoma is a benign adnexal tumour thought to be of eccrine origin, also named syringofibroadenoma of Mascaro, after the man who first described this tumour. It typically occurs on the extremities.

Scanning power view of the histology of syringofibroadenoma reveals an epidermal proliferative process (Figure 1). Vertically oriented anastamosing strands of basaloid epithelium are seen arising from multiple points along the epidermis (Figure 2). The basaloid cells are smaller than adjacent keratinocytes and show mild variation in size (Figure 4). Ductal differentiation is seen (Figures 3 and 4). The tumour has notable intervening fibrovascular stroma, and may have a mild superficial lymphocytic infiltrate (Figure 4). 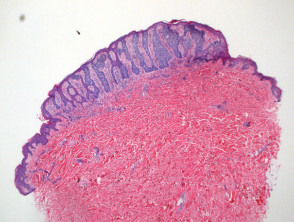 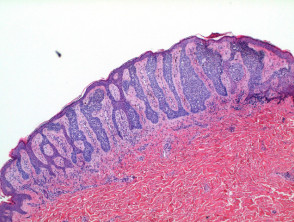 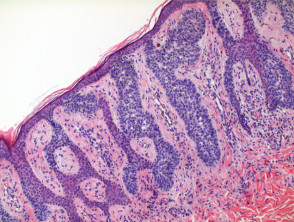 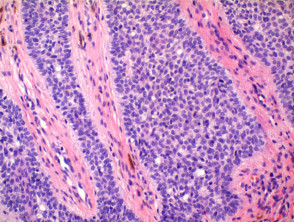 A clear cell variant has been described, which shows cytoplasmic clearing.

Multiple syringofibroadenomas have been seen in association with the ectodermal dysplasias syndromes of Clouston and Schopf.

Reactive eccrine syringofibroadenoma demonstrates the same histological features but is seen adjacent to or in association with various inflammatory diseases.

Syringofibroadenocarcinoma: This is seen as an area of transformation within an existing syrigofibroadenoma where a malignant phenotype emerges displaying cytological atypia.