Dermatophytic infections of the scalp (tinea capitis) are characterized by involvement of the hair shaft by pathogenic fungi.

The causative organism determines the pattern of hair invasion.

Endothrix infections – There is minimal epidermal response aside from mild hyperkeratosis (figure 1). The hyphae extend within the hair shaft and produce spores (figures 2, 3). This form is caused by Trichophyton tonsurans/violaceum.

Ectothrix infections – There is also often minimal inflammatory reaction. The fungal forms coat the outside of the hair shaft without significant invasion of the shaft itself. This is typically caused by Microsporum canis/audouinii. 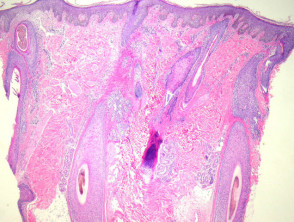 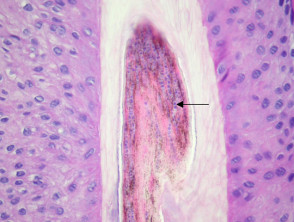 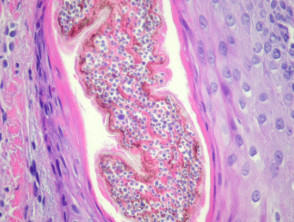 The organisms are usually readily seen on high power magnification on haematoxylin-eosin sections (figures 2, 3). GMS and PAS stains can be used to highlight the organisms.

Normal scalp – The fungal organisms may be easily overlooked at low power. There is often minimal inflammatory reaction (figure 1).