Trichilemmoma is a benign skin tumour thought to arise from the outer root sheath of the hair follicle.

Trichilemmoma is usually a symmetrical epithelial nodular proliferation. Figure 1. There may be mild papillomatosis with overlying hyperkeratosis. Figure 2. The key finding is of a downgrowth of epithelial cells with increasing clear cell differentiation. Figure 2, Figure 3. These changes are frequently more obvious towards the base of the lesion. The clear cell is PAS positive but diastase labile indicative of the glycogen contents. There is often basal peripheral palisading, resting on a distinctive PASD positive eosinophilic hyaline basement membrane. Figure 4. 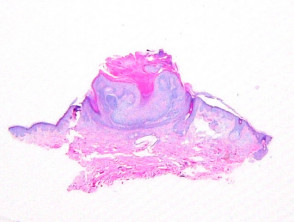 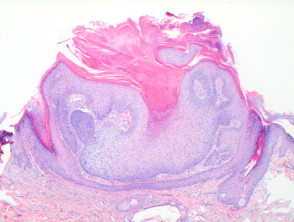 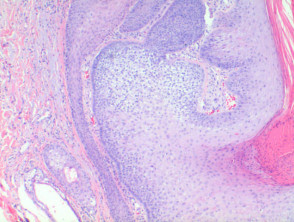 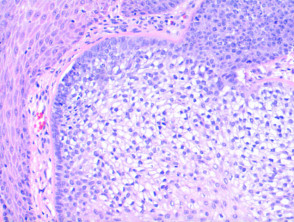 Desmoplastic trichilemmoma: In this variant the tumour develops infiltrating cords predominantly at the base of the lesion. This is surrounded by a sclerotic stroma and a mild to moderate lymphocytic inflammatory response.