What is Wilson disease?

Wilson disease is a rare inherited disorder that results in excessive amounts of copper in the body. It is four times more common in females than in males. Copper is normally metabolised by being incorporated into copper-containing enzymes called ceruloplasmin and being excreted into the bile. However, in Wilson disease, the process is impaired and excess copper is initially deposited in the liver where it damages liver cells. Eventually, as liver copper levels increase, it is released into the blood and deposited in other organs, particularly the brain and spinal cord. The copper deposits cause tissue damage, tissue death, and scarring, which cause the affected organs to stop functioning properly. Wilson disease is also known as hepatolenticular degeneration.

What are the signs and symptoms of Wilson disease?

Although abnormal copper accumulation is happening from birth, the symptoms of Wilson disease may not become apparent until late childhood or adolescence. Because copper initially accumulates in the liver, the first sign of the disease is usually liver-related and manifests as one of the following:

The most common initial presentation is with cirrhosis, usually occurring during the first 10 years of life. Possible symptoms may include:

Other symptoms that may occur as copper is deposited into other organs include:

Neurological symptoms – usually becoming apparent around the 2nd or 3rd decade of life, but may even occur as late as 50 years of age

What is the cause of Wilson disease? 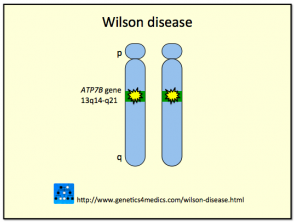 How is the diagnosis of Wilson disease made?

Laboratory finding may include:

Physical examination may show signs of liver or spleen disorders, including cirrhosis and liver necrosis. X-ray examinations including MRI or head CT scan may show abnormalities, especially around the basal ganglia in the brain. Abdominal scans may indicate liver disease or other abnormalities.

Genetic testing for Wilson disease has not yet been developed.

What is the treatment for Wilson disease?

The goals of treatment are to reduce the amount of copper in the tissues and to manage the symptoms and complications of the disorder.

To remove excess copper from the body and prevent ongoing copper accumulation, chelating agents and medications that block copper absorption from the gastrointestinal tract are used.

Patients with Wilson disease will require lifelong treatment to control the disorder. Wilson disease may be fatal because of loss of liver function and toxic effects of copper on the nervous system, hence patients need to be monitored regularly to address early, and avoid complications.

Patients with severe liver disease may be offered liver transplantation.