Home Principles of dermatological practice Functions of the skin CME

Functions of the skin

Intact skin is essential for life, illustrated by the serious nature of extensive thermal burns - the mortality risk of a 40% total body surface area burn in a 70-year-old patient is 94%.

Secretions
The surface of the scalp, face and upper trunk of adults is a hydrolipid film made up of sebum, water, salts and metabolic products. Sebum is produced by sebaceous glands within the hair follicular apparatus. The lipids protect against irritants, allergens and certain toxins and prevent water loss.

Eccrine sweat glands produce a salty solution. They are found over most of the body but are often profuse over the scalp and forehead, axillae, palms and soles. This arises in response to exercise and high temperature (internal or environmental).

Apocrine glands are found in axillary, pubic and perianal regions resulting in a sticky secretion prone to malodour. The smell is due to colonization by bacteria.

Skin permits a stable internal environment, not just holding the body together but also protecting internal organs from environmental dangers.

Skin colour varies from white (absence of pigmentation) to black (densely melanized). The colour depends on the quantity and depth of melanin and other chromophores.

The pigment melanin is formed by the action of tyrosinase on dopamine metabolites in melanosomes (specialised pigment granules) in the cytoplasm of melanocytes. Skin produces predominantly brown to black eumelanin and a little phaeomelanin; the hair of red-headed celts contains mainly phaeomelanin.

The amount of melanin depends on:

There are melanocytes in the normal skin of all races. However, dark-skinned people produce more melanin, and it is distributed to keratinocytes throughout the epidermis. The more superficial the pigment, the more effective the protection it provides against damage caused by ultraviolet radiation. Albinos have inactive melanocytes.

Melanin is found in the dermis in some melanocytic naevi (moles) and as a result of inflammation affecting the level of the basement membrane (postinflammatory pigmentation). 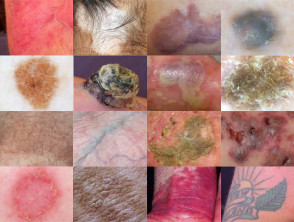 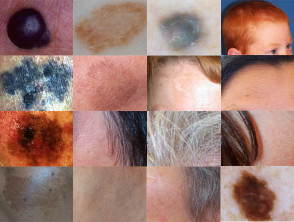 Melanin pigmentation is promoted by:

It may be reduced by:

Compare phaeomelanin and eumelanin. What is the explanation for variations in skin colour between different individuals and different races?

Structure of the dermis quiz

Structure and function of the skin quiz