Apocrine mixed tumour is also known as apocrine chondroid syringoma. These lesions present as non-descript dermal nodules which grow slowly. They most often arise on the skin of the head and neck.

Apocrine mixed tumours form a well circumscribed dermal mass. These distinctive tumours are composed of both a mesenchymal component which is usually chondroid, and an epithelial component (figure 1). The cartilage is mature, with bland chondrocytes and a silver/grey matrix (figure 2). The epithelium is bland, and consists in most areas of two cell layers: a myoepithelial layer and a lining luminal layer (figure 3). 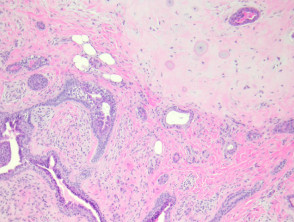 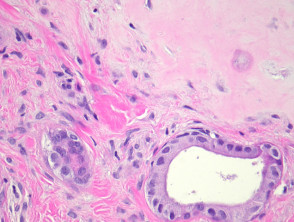 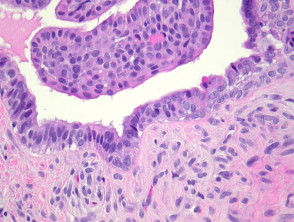 Eccrine mixed tumour: These are composed of quite regularly spaced small glands lined by a thin epithelium set in a fibromucinous stroma Pleomorphic adenoma: These salivary gland tumours are usually morphologically identical. The location in the parotid gland or minor salivary gland allows distinction