Bacillary angiomatosis is caused by the Rickettsia-like organism, Bartonella henselae. 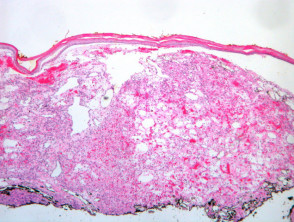 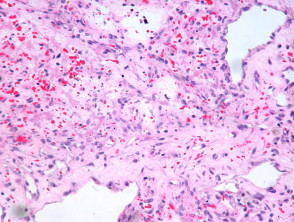 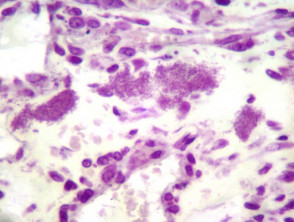 Warthin-Starry stain or gram stain highlight the pink-purple clumps of bartonella organisms. The organisms are revealed to be gram-negative rods with gram stain (Figure 3).

Pyogenic granuloma – This also shows an ulcerated lobulated vascular proliferation and inflammatory changes. The organisms are an obvious clue. In organism-poor cases fragmented inflammatory cells can be an important clue and prompt further microbiologic studies.

Verruga peruana – This disease is practically indistinguishable from bacillary angiomatosis histopathologically and similar clumps of bacteria may be found. This disease occurs in Peru and some other parts of South America and is caused by an infectious agent, Bartonella bacilliformis, a relative of Bartonella henselae.