Bindii is the Australian name for a prickly annual weed. It is a low-growing plant that is widely established in lawns and flower beds. The name is used to refer to several species, particularly Soliva pterosperma and Soliva sessilis. Other names for bindii are bindi, bindyi, Jo-Jo, bindi-eye, and, in New Zealand, Onehunga weed, prickle weed, and burrweed.

The bindii weed originated in South America, and has since spread to Australia, New Zealand, Portugal, Spain, and the southern United States. 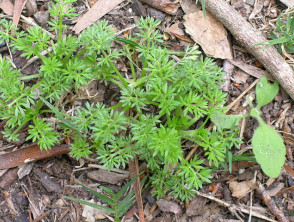 What is bindii dermatitis?

Bindii dermatitis is a form of irritant contact dermatitis resulting from injury by the seed of the bindii weed.

Who gets bindii dermatitis?

Bindii dermatitis may affect anyone. However, it most often affects boys 5–18 years of age, possibly because of their active lifestyles involving outdoor sports.

The risk of dermatitis may be increased if there is a family history of bindii dermatitis.

What are the clinical features of bindii dermatitis?

Bindii dermatitis most often occurs in late spring and early summer and is less frequent during winter when the bindii weed becomes dormant.

The spine of the bindii seed penetrates the skin causing a sharp prick. Over the next few days, the skin around the spine becomes inflamed, forming discrete red papules with a central puncture site.

The severity of the dermatitis depends on:

Some patients may develop an immediate weal reaction when pricked by the bindii weed; this can resolve without progressing to dermatitis.

How is bindii dermatitis diagnosed?

Bindii dermatitis is a clinical diagnosis made through taking a thorough medical history and examination of the patient. There are no specific tests.

The histology of a skin biopsy of bindii dermatitis shows spongiosis, mixed dermal infiltrate, and foreign-body giant cells. There may be marked oedema of the papillary dermis and draining sinuses. Evidence of plant material may also be present.

What is the treatment of bindii dermatitis?

Visible bindii seeds or 'prickles' should be manually removed.

Bindii dermatitis does not always respond to topical or systemic corticosteroids. Luckily, it is self-limited.

How is bindii dermatitis prevented?

Bindii dermatitis can be prevented by avoiding contact with bindii weed.