Blastomycosis-like pyoderma is a form of pyoderma which elicits an impressive verrucous epidermal reaction and draining sinus. Various bacteria have been implicated as possible causative organisms.

In blastomycosis-like pyoderma, sections usually show a broad verrucous lesion with epidermal papillomatosis which may resemble a keratoacanthoma (figure 1). There may be surface erosion and suppuration (figure 2). Numerous cystic spaces connect with the surface via draining sinuses (figure 3). There may be a pseudo-infiltrative growth pattern as the regenerative epithelium mimics an invasive squamous cell carcinoma (figure 4). Neutrophilic collections are present in the dermis and within squamous islands (figures 5, 6). 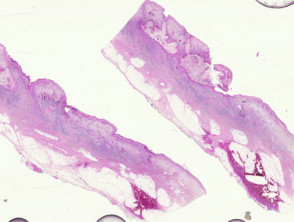 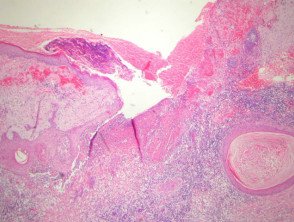 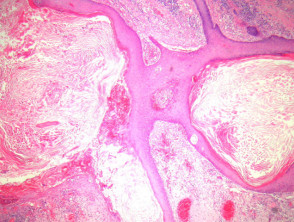 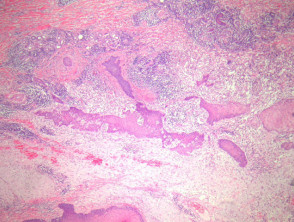 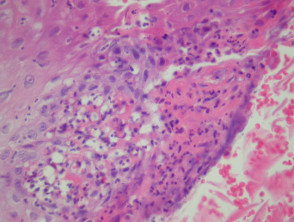 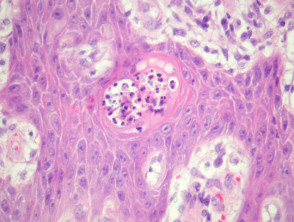 Gram stain and culture studies may reveal bacteria. Staphylococcus aureus is the most frequent causative agent.

Blastomycosis – The reaction pattern is very similar. Special stains for fungal forms should be performed.

Atypical mycobacterial infection/sporotrichosis — these infections may also cause a massive epidermal response. Searching for the causative organisms and correlation with the cultures results can be helpful.

Actinic comedonal plaque — may represent a later stage of blastomycosis-like pyoderma. The inflammation is typically less striking and there is usually impressive solar elastosis.