Botryomycosis (bacterial pseudomycosis) is an uncommon chronic bacterial infection of skin caused by masses of colonizing bacteria. Staphylococcus aureus is the usual cause, but a wide range of gram negative organisms have also been isolated.

Botryomycosis resembles mycetoma with granules present within suppurative inflammation. The granules are composed of blue-stained bacteria surrounded by an intensely eosinophilic coat (the Splendore-Hoeppli Phenomenon, figure 2). 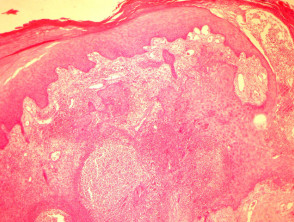 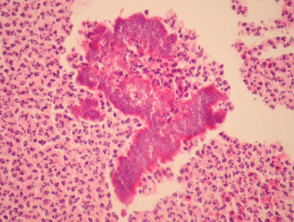 Mycetoma – In contrast to mycetoma, botryomycosis is not caused by fungi or actinomycosis.

Squamous cell carcinoma – A massive epidermal reaction (figure 1) can be confused with an invasive carcinoma, particularly if only the surface of a lesion is biopsied.