Cherry angiomas (also known as Campbell de Morgan spots) are common benign tumours found in older adults. Frequency increases with age. They can appear anywhere on the body as small papules ranging in colour from red to dark purple.

Cherry angioma specimens are polypoid and often have an epidermal collarette. The overlying epidermis is atrophic in established lesions. Within the superficial dermis the tumour is composed of dilated interconnecting capillaries (Figure 1). 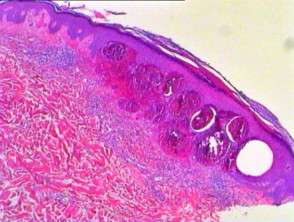 Histologically, there may be some similarities with lobular capillary haemangioma (pyogenic granuloma). However, capillaries here are arranged in a more prominent lobular formation, less dilated and often display endothelial cell cytological atypia and numerous mitoses not seen in cherry angioma. Inflammatory infiltrate and ulceration are additional features of lobular capillary haemangioma.