Chloracne is a rare skin condition caused by certain toxic halogenated aromatic hydrocarbon chemicals, including the dioxins. It develops a few months after swallowing, inhaling or touching the responsible agent.

The name "chloracne" is misleading, because it is not related to acne. A more correct terminology is “MADISH”—Metabolising Acquired Dioxin Induced Skin Hamartomas. Rather than overactive sebaceous glands, as occurs in acne, the glands concentrate the responsible chemical and metabolise it extremely slowly. This process alters gene expression in the sebaceous glands and changes them from functioning grease-producing glands into the skin cysts (hamartomas) of chloracne.

Most cases of chloracne are due to occupational exposure but chloracne can also arise after accidental environmental poisoning. One hundred and ninety-three cases of chloracne resulted from an industrial accident in Seveso, Italy in 1976. Deliberate dioxin poisoning is blamed for Ukrainian President Victor Yushchenko's changed appearance in September 2004. Very low level dioxin and dioxin-like aromatic hydrocarbons are ubiquitous in the environment but standard environmental exposure does not result in chloracne. 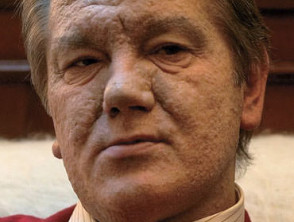 Chloracne is caused by exposure to halogenated aromatic hydrocarbons, which are most often found in:

Chloracne is the most common skin sign of dioxin poisoning. Responsible chemicals include:

Acute exposure to extremely high levels of the responsible chemicals listed above, may cause systemic symptoms. These include:

As these systemic symptoms abate, the skin changes begin, and this is when the diagnosis of chloracne may become more obvious. It is thought the skin changes occur as the chemical begins to redistribute out of other organ systems into the sebaceous (oil) glands.

What are the features of chloracne?

The features of chloracne are:

The lesions are most often seen on the cheeks, behind the ears, in the armpits and in the groin. Although they resemble acne, the skin is not usually oily; in fact the oil glands are often smaller than usual.

Other skin problems seen in patients with chloracne include: 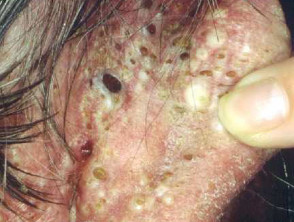 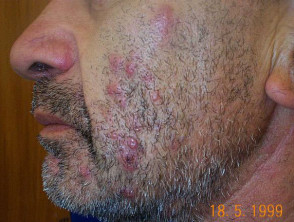 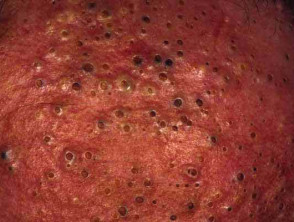 Other health problems may include:

The data for an association with other health problems and birth defects are conflicting.

How is a diagnosis of chloracne made?

Blood test levels of the halogenated aromatic hydrocarbons are not reliable for diagnosis, due to redistribution of the chemicals around the body and their metabolism.

The diagnosis is mostly on the grounds of history and expert clinical opinion. Biopsies of affected skin may show a reduction of the normal sebaceous gland density and development of the skin hamartomas. Immunohistochemical tests (eg CYP1A1) can be done on the hamartomas to determine up or down-regulation of gene expression to support the clinical diagnosis.

What is the treatment for chloracne?

Once chloracne has been recognised, the source of exposure must be identified and the affected individual and other workers must be removed from exposure to it.

Occupational disease due to chemical exposure is a notifiable condition. If you live in New Zealand, contact Worksafe NZ of the Department of Labour, New Zealand for further information.

Most chloracne lesions clear up within 2 years providing exposure to the chemical has stopped. In some cases they persist much longer because the chemical continues to be slowly released from fat cells.

Persistent cases may be helped by standard treatments for acne, particularly oral antibiotics and sometimes isotretinoin. Comedones and cysts can be punch excised or cauterised.