Histologically, these tumours arise in the dermis and are usually well circumscribed (figure 1). The cells of a tumour are clear, large cells (approximately 6–8 times the size of a stromal lymphocyte and about half the size of a subcutaneous adipocyte) that are oval to polygonal in shape with abundant clear cytoplasm (figure 2). Closer inspection reveals that, while many of the cells are optically clear, others contain lacy, reticular cytoplasm that has a slightly granular appearance (figure 3). 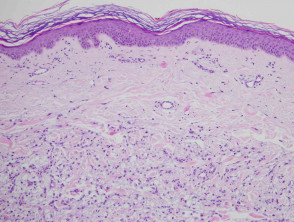 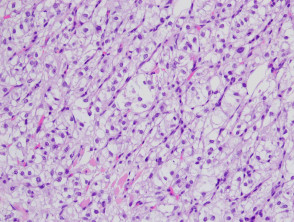 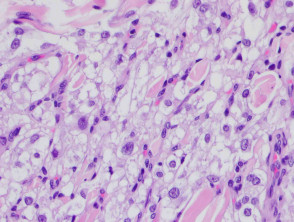 Metastatic clear cell carcinoma including renal cell carcinoma: This is probably the most important differential diagnosis. Numerous immunohistochemical studies including PAX-8, AE1/3, RCC, EMA need to be confirmed to be negative to exclude this possibility

Melanoma — CCMN is negative with the immunohistochemical markers for melanoma