PEComas are a group of mesenchymal tumours composed of perivascular epithelioid cells. This family of tumours includes a spectrum of neoplasms in different organs including angiomyolipoma of the kidney and liver, sugar tumour of the lung, lymphangiomatosis, and lymphangiomyoma.

Sections show a discrete mass in the dermis (figure 1). The tumour is composed of epithelioid cells with clear to eosinophilic cytoplasm and round to oval nuclei with obvious nucleoli (figure 2-3). They frequently exhibit a nested or trabecular arrangement (figure 3). 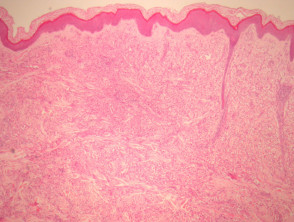 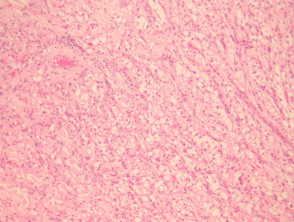 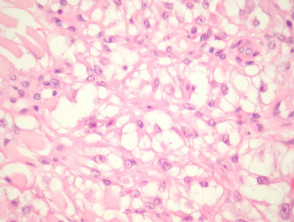 Periodic acid-Shif (PAS) and PAS-Diastase stains showed glycogen deposition within the cytoplasm of the clear cells of PEComa.

Immunohistochemistry reveals HMB-45 is strongly positive in all cases. Microftalmia associated transcription factor (MiTF) and desmin may show some staining. S-100 is negative.

Given the rarity of this PEComa, immunohistochemical studies are generally needed to distinguish this tumour from other tumours which also exhibit clear cells. These are listed below. HMB-45 positivity and S100 negativity in a clear cell tumour should raise the possibility of PEComa.

Other clear cell tumours in the differential diagnosis: