Granular cell tumour is also known as Abrikossoff tumour. It is thought to have a neural origin, probably derived from Schwann cells.

'Pustulo-ovoid bodies of Milian' may be present (figure 2, arrow). These are large granules surrounded by a clear halo.

Sometimes, the overlying epidermis may become markedly hyperplastic and mimic a squamous cell carcinoma. This is thought to be a reactive phenomenon. 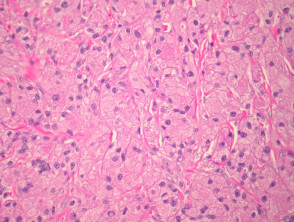 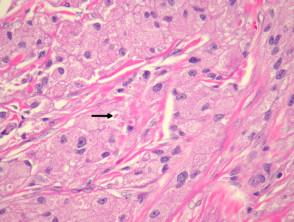 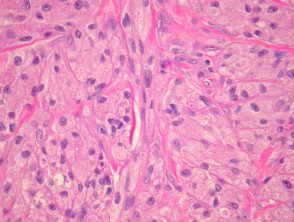 Rhabdomyoma — These may be similar to granular cell tumour. Rhabdomyomas are positive with desmin and myoglobin.

Other tumours with granular cells – Granular cell change has been described in many other tumours (including dermatofibroma, fibrous papule, AFX and primitive polypoid granular cell tumour). S100 positivity is generally a useful diagnostic aid.