What is a granular cell tumour?

A granular cell tumour is an uncommon, generally benign tumour previously known as granular cell myoblastoma. Their origin has been debated since their first description, but it is now generally believed they originate from Schwann cells (cells that provide myelin insulation to nerves).

They are named granular cell tumours because of their appearance under the microscope.

Where does a granular cell tumour occur?

Granular cell tumours occur in the skin or subcutaneous tissue in 30–40% of cases. Approximately 50% occur on the head and neck with nearly 25% on the tongue. They may, however, occur at any skin or mucosal site and occasionally affect internal organs.

What are the clinical features of cutaneous granular cell tumour?

A granular cell tumour is most often a solitary, small (usually 1–3c m), and painless. Occasionally mild itch or tenderness is described. They usually appear as a slowly growing skin coloured nodule with a smooth or slightly rough surface. 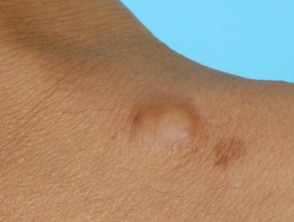 Who gets granular cell tumour?

Granular cell tumours can occur in anyone however, they tend to be more common in females and dark-skinned people. Most tend to develop between the third and fifth decades of life.

Multiple granular cell tumours may occur in up to 25% of cases and it is in these patients that associations are occasionally made with other conditions. There seems to be an association with multiple lentigines, and there have been cases reported in patients with a definite diagnosis of Noonan syndrome, neurofibromatosis type I, and Leopard syndrome. Familial cases of multiple granular cell tumours also occur.

What tests are required?

The diagnosis of granular cell tumour is made by skin biopsy. Histopathology reveals characteristic granules within the cytoplasm of large tumour cells.

A general medical history and examination to exclude any potentially associated conditions are useful.

What is the treatment of granular cell tumour?

Most often surgical excision of the tumour will provide a diagnosis and the treatment of choice.

What is the prognosis for granular cell tumour?

More than 98% of granular cell tumours are benign and should be cured following complete excision. Malignant change has been reported very rarely and tends to be more reliably predicted by aggressive clinical features (rapid growth, size greater than 4cm, necrosis, lymph node involvement) rather than histological features. Therefore, large or aggressively growing tumours should be followed up post-operatively.